Press Enter to Search
Just stumbled upon this excellent talk on the future of Interaction Design within VR.  Well worth a look.
In December I got invited to speak at the first inaugural Storycode event in my hometown of SF.  Its fitting that I got an opportunity to put together a cathartic post mortem presentation in my hometown.  I got a bit tipsy, and was really able to relax and open up to the audience.  The result is an hour of me telling all about the trials, tribulations, and hard lessons learned from the 4.5 years I spent birthing Ajax into the world.  END_OF_DOCUMENT_TOKEN_TO_BE_REPLACED
This just came across my desk, from one of my all time favorite speakers, Kirby Ferguson (of Everything is a Remix Fame)
Walking Dead was recently coined “Game of the Year” by the VMAs, an honor usually bestowed on AAA favoriites like Call of Duty. So, I had to check it out, being a fan of the comics (and a patient nagging family member of the TV Show).  I tried the game on my Playstation, and was not terribly impressed.  Then, at the coaxing of a friend, I tried it on my iPad.  WOW. Its hard to describe the difference an interface makes, but what felt shallow and unpolished on console was intimate and deep in handheld touch. Walking dead is basically an interactive story fraught with difficult decsions coninciding with Zombie attacks.  The mechanics are very simple, you can operate the entire game with just a single finger.  But its the choices you make within the narrative that makes the game challenging, and that alone justifies taking the time to play this game. Tell Tale has done well with the product, reporting over 8.5 million sales of the 5 episodes across all platforms (25 percent of those sales on iOS). I hope we see more of these types of games.  They are starting to show the intersection of narrative and interactive in a way that most console games have failed to even try.
I was rather excited when a friend showed me this new interactive story experience, called Yearwalk: Part hypercard game, with a drag / touch interface, YW is accessible but also confusing. Things I love: – art style – sound design – interface (in principle) However I got motion sick with all the sideways scrolling, and the difficulty ramp was a bit odd for me.  Promising idea, but execution was a bit lacking.  Hope to see more of these types of experiments in the future, and definitely worth checking out.
I while back I was talking about the need / capability for phones to replace consoles… except for that pesky interace issue. Well, worry no longer, Phonejoy has a solution for you: 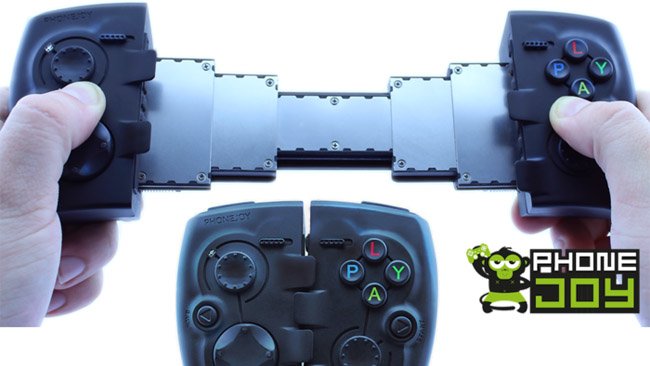 A telescoping controller interface that slides onto your phone, giving it the full button layout of a modern console, dual analog sticks and all.

I’m curious to see how Android devices compete with Airplay, as this really is the final piece to a full on console experience.  And the mobile revolution marches on…
Remember Nawlz?  Well, that revolutionary online comic came from the brain of Stu Campbell, and he has recently completed a new project called NeoMad.  Check out the trailer: This book is related to Stus other project, the Love Punks Game.
A friend forwarded this to me off Kotaku a while back.  Normally I write about things after they come out, but Tengami isn’t due til Summer. Basically the aesthetics of an old pop up book mixed with realtime 3D and side scrolling platform game play + puzzles.  I especially love the page turn animation effect to change scenes.  What can I say, my hopes are high. Enjoy the teaser video below, and rest assured I’ll be back with my thoughts on it after it ships.
So this game came out a while back and I am just now getting around to writing about why I like it so much. Basically, The Room is like a miniature Myst, with show not tell storytelling that unfolds as you unlock the mysteries contained within a virtual series of ornate boxes. The game makes perfect use of the multi touch interface, and is basically a big interactive puzzle, not so unlike the much successful ZenBound series.  I think this kind of exploration works very well, and could easily be paired with passive film cutscenes (or realtime ones) to create more complex narratives. Beautiful visuals as well, this game uses some nice DOF and specular effects. Highly recommended.
So for the past several months, I’ve been moonlighting as a creative consultant for interactive comics at Disney Imagineering.  It’s been a very nice well paid break, and at long last the app I worked on finally shipped.

The app is called Habit Heroes and you can check it out here. The comic came out a bit rougher than I would have preferred, but the app does do a lot of interesting new things, like reference activities and interactive experiences outside of the core narrative.  So, I got to try out a few things I’ve been itching to play with.  There’s also an avatar selector that populates a custom character throughout the story. I did get to animate the second and third issues myself, and am quite proud of how they turned out.  These issues are due to ship with an update in February, so stay tuned for more on that. I’m grateful for the opportunity to see the vendor / client relationship from the other side, and feel much more confident in my ability to vet future work for hire projects in the future.
0%