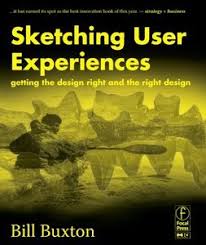 Recently a good friend turned me on to this classic Book, Sketching User Experiences  by Bill Buxton. The general concept is simple: The fidelity of a sketch is as important as the content of a sketch.   For example, if a sketch is rough and quick, the audience infers that this idea is open to interpretation, their input, and allowed to be shaped by the person viewing it (not just the person who drew it and presented it.) This simple concept has come up recently with my work at Britelite Immersive.  We are a full service immersive design shop and the nature of our work requires us to do much exploration with our clients to learn their needs in order to figure out the best solution to meet those needs (which are often complex and require some research to fully understand.)   END_OF_DOCUMENT_TOKEN_TO_BE_REPLACED
It’s rare that I see exemplary new interactive comics that advance the format.  The Boat by SBS is a great example, click here to view.

Walking Dead was recently coined “Game of the Year” by the VMAs, an honor usually bestowed on AAA favoriites like Call of Duty. So, I had to check it out, being a fan of the comics (and a patient nagging family member of the TV Show).  I tried the game on my Playstation, and was not terribly impressed.  Then, at the coaxing of a friend, I tried it on my iPad.  WOW. Its hard to describe the difference an interface makes, but what felt shallow and unpolished on console was intimate and deep in handheld touch. Walking dead is basically an interactive story fraught with difficult decsions coninciding with Zombie attacks.  The mechanics are very simple, you can operate the entire game with just a single finger.  But its the choices you make within the narrative that makes the game challenging, and that alone justifies taking the time to play this game. Tell Tale has done well with the product, reporting over 8.5 million sales of the 5 episodes across all platforms (25 percent of those sales on iOS). I hope we see more of these types of games.  They are starting to show the intersection of narrative and interactive in a way that most console games have failed to even try.
Remember Nawlz?  Well, that revolutionary online comic came from the brain of Stu Campbell, and he has recently completed a new project called NeoMad.  Check out the trailer: This book is related to Stus other project, the Love Punks Game.
I first discovered Brian K Vaughans voice when I picked up Y the Last Man. Coincidentally, that series rekindled my love + fascination with graphic novels, and I ended up purchasing pretty much the entire series in trade paperbacks.

So, not surprisingly, Vaughans latest book, Saga, is also quite good.  Really good.  In fact, I dare say it might be the best comic book I’ve ever read.  YEAH. I also think a lot of the story’s success is due to the fantastic illustration of Fiona Staples.  the character design is top notch, and had me either laughing out loud or reacting with horror on a regular basis. Pick up this book today.
So for the past several months, I’ve been moonlighting as a creative consultant for interactive comics at Disney Imagineering.  It’s been a very nice well paid break, and at long last the app I worked on finally shipped.

The app is called Habit Heroes and you can check it out here. The comic came out a bit rougher than I would have preferred, but the app does do a lot of interesting new things, like reference activities and interactive experiences outside of the core narrative.  So, I got to try out a few things I’ve been itching to play with.  There’s also an avatar selector that populates a custom character throughout the story. I did get to animate the second and third issues myself, and am quite proud of how they turned out.  These issues are due to ship with an update in February, so stay tuned for more on that. I’m grateful for the opportunity to see the vendor / client relationship from the other side, and feel much more confident in my ability to vet future work for hire projects in the future.
I first attended in San Diego Comicon in 2009.  I was new to the industry, and spent most of my time in Artist Alley trying to recruit people to my cause.  It was painful.  As much as I loved comics, and knew that I wanted to contribute to the medium, I had a very hard time getting peoples attention and convincing them I was worth their time. The second year I was there, the iPad has just launched and I again was trying to convince people that what I was doing was worthwhile.  The comics industry was still very dismissive of digital, and the most memorable quote I got was from the head of SLG.  “Why would I want an iPad?  It doesn’t print!”

My, how the tide has changed. I must say, if there was ever an affirmation of the progress I’ve made with Ajax, SDCC was proof in the pudding.  Here are some hilights:

I reached out to Ryan Woodward after learning of his new graphic novel Bottom of the Ninth. I became a fan of Ryans work after seeing his amazing short animation, Thought of You.  Apparently Operation Ajax played a key part in inspiring Ryan to create his iPad comic, and to know that my work appeals to people that I respect so much was really an incredible boost.

I first met Robert Valley at SDCC in 2009, before I knew who he was.  His work on the Beatles Rockband Intro remains to this day one of my favorite pieces of animation.  I got to have dinner with him and several others that create the Tron animated series, and given the trend of Disney with Tall Chairs tools, I’m optimistic about a future collaboration in the interactive comics space.

Madefire hosted a dinner and I got to meet Dave Gibbons among others excited to be creating in this new medium.  Given that it was the Watchmen Motion Comic that inspired the presentation style of Ajax, it seemed only fitting that he is involved from the ground up pioneering this new medium.

I got to revamp my panel from SXSW on Reinventing the Graphic Novel for the iPad. It was an honor to present my work before the comics audience, and the response I got suggested that my message strikes a nerve and raises some good questions about the future of digital books. I dressed up in classic spy attire.  Its probably time I bought one of these outfits for myself, given how pricey renting them has been…

Overall, best Con yet.  I can’t imagine what I’ll be talking about at SDCC 2013, but I’m quite curious to know what it will be