Press Enter to Search
August 19th marked the 60th anniversary of the coup.  And what better way to celebrate than having the CIA itself formally take responsibility for Operation Ajax?  I found it a bit hard to believe that it actually happened, but my inbox was full of friends sending me various links from around the web saying things like “did you see this??” The nicest part for me personally was having the app mentioned on The Rachel Maddow Show. END_OF_DOCUMENT_TOKEN_TO_BE_REPLACED
So a while back I discovered a little Android App called Phone Story, from one of my all time favorite companies, Molle Industria. This is the studio that brought us the brilliant McDonalds Game, amongst other gems.

Phone Story is a win in a lot of ways.  Besides its messages, which Molle is known for in its internal projects, the combination of different narrative formats is at once ingenius and offputting.

The app greets you by literally turning your phone into an animated character with a face that begins to talk to you about itself, very meta and an awesome idea in and of itself.  The phone in a way, transforms into a handheld character.  In this case fully, scripted, but imagine if Apple had applied a visual design for Siri?  Maybe its coming one piece at a time, but eventually it would not surprise me if we began relating to our mobile devices via voice and touch as virtual people. Phone Story is essentially a series of mini games interspersed with this phone character narrative to inform the user about the inherent evils in the current ecosystem of electronic consumption and waste. 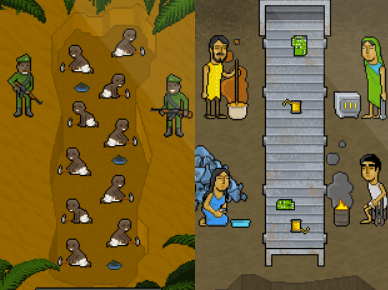 While the games themselves may not be as deep or effective at hammering home the messages contained within, I LOVE the playing with multiple narrative mechanics.  Add in the fact the story is all about the phone, and the result is a brilliant approach to serving up a message based entertainment experience. Its is worthy to note that Phone Story was banned from the iOS app store, and its easy to see why.  This may only further reinforce the reputation of Apple in regards to their relationship with producers and consumers, as so well documented by This American Life covering Mike Daisey that I previously linked to. I hope we see more apps like this, and can change the ewaste ecosystem for the better. More about Phone Story on Molle Industrias site.
A few days ago, a family member linked me to a must listen to This American Life, talking with Mike Daisey, author of the show The Agony and Ecstasy of Steve Jobs. EDIT – Daisey apparently falsified a ton of information and This American Life retracted the entire episode. The core concept is the true cost of our addictive consumer devices, and given that my industry revolves around the iPad, Daiseys’ account of Shenzen struck a particularly powerful note for me. I’ve been a dedicated Apple fan for decades, and have a general appreciation for well designed products.  For a while, I thought this would be my professional path, even taking several years of night courses at Art Center in Pasadena while I toyed with the techniques of sketching out game consoles, portable music players, and cars. I’ve always prided myself as being a savvy consumer, and strongly desire to own well made, well designed products that last.  It took me months of agonizing research to finally pull the trigger on my home theatre system, and I actually enjoy showing these prized possessions to my friends, advising them on how to score a quality piece of equipment that they will enjoy for years. I’ve known about the concept of planned obsolescence for a long time.  However, it is easy to forget that part of engineering almost all modern technology is the built in timed failure intended to not just make you want the next shiny new thing, but to force you to buy it. http://www.youtube.com/watch?v=0bxzU1HFC7Q I do believe there is room to enjoy our gadgets in a sustainable way.  I would love nothing more than to see a return to the maunfacturing base of the United States, restoring the lost sense of pride in “American Made” with a premium price attached to enduring, sustainably produced goods instead of the impulse buy trash cycle we are currently stuck in. The whole system has been building for some time, starting with collaboration between corporations and Edward Bernays (Nephew to Sigmund Freud) after WW1.  If you have the time, I can’t recommend enough the BBC Docu Century of the Self which tells the story in eloquent and alarming detail.  Best watched in 1 hour chunks: http://www.youtube.com/watch?v=IyPzGUsYyKM I’m on my second HP all in one printer.  Bought for 90$, only a bit more than a full set of new ink cartridges. I just hope some Russian hacker makes reset software for my model, I’ll probably be needing it soon…
A lot of strange and troublesome legislation is circulating throughout the US government these days.  If you haven’t heard, the internet’s open system is under threat from large corporate interest, namely the Recording Industry Associates of America (RIAA) and Motion Picture Association of America (MPAA). 2 bills have been introduced to cripple the workings of the internet in the name of preventing piracy of music and movies: Protect IP Act (PIPA) and Software Anti Piracy Act (SOPA). While my understanding on PIPA is still not super solid at this moment, SOPA has some major potential problems with it.  Primarily that it allows the meddling with DNS to try and block external websites to battle piracy and copyright infringement.  According to the video below, however, you can always just enter in the IP address manually and still access these blocked sites. In short, the impact of  SOPA and PIPA could make it possible for corporations to shut down or censor sites like youtube and facebook for “copyright infringement” because of the content their users post.  So far, it’s on the users of these sites to regulate the content they post. As of December 21st, SOPA hearings are delayed til January.  It seems there has been an outpouring of concern about the impacts this legislation would have on our beloved internet, and the representatives responsible for voting on it have little to no understanding of the tech or inner workings of the web themselves. Given how facebook, twitter, etc have become conduits for broadcasting media related to political voice internationally, including OWS, their function is vital to how we express ourselves artistically and politically.  Which brings me to the next piece of legislation up to pass, the National Defense Authorization Act (NDAA): This bill essential expands the power of the state to detain american citizens with out a trial, for being suspected of aiding or being involved with “terrorism”.  Everyone seemed to think that Obama would veto this bill, but that didn’t seem to happen.  There’s been a lot of back and forth trying to decipher if NDAA really does allow US citizens to be “disappeared” and according to this detailed post on Salon.com, it does.

What I find so ironic about the text in the bill is that it defines anyone that “substantially supported al-Qaeda, the Taliban, or associated forces that are engaged in hostilities against the United States”.  Given that we directly funded the Taliban in the 1980’s through the Pakistani ISI (Inter Services Intelligence) to fight the Soviets in Afghanistan, that would make the CIA a terrorist organization?!? So you can fund terrorists to fight communists.  But if there are no communists left to fight, then you fight the terrorists.  So where are the terrorists?  OWS? When we stand up to peaceably assemble and voice our displeasure with the system, we then become labeled terrorists and can be disappeared?
A while back, a friend linked to Jay Smooth talking about the passing of Michael Jackson.  I was struck with how thoughtful and eloquent Smooth is, and I found his commentary on OWS equally powerful: And for posterities sake, the MJ monologue: I can’t help but reflect a bit from that second video.  The entire OWS movement has touched people mostly as media experiences created via cell phones.  Operation Ajax was my attempt to bring history to a wide audience through new forms of media.  And this entire blog is my attempt to express myself by making media out of my life. You can find many other inspiring videos on the ill doctrine site. Enjoy.
A lot of information is swirling around the intervwebs regarding OWS, and its a bit hard to sift through it all and get a concise set of issues out of the brewing movement.  It helps when articulate well respected people rise to the fore to help communicate with people both inside and outside the movement, and Former Secretary of Labor (Under Clinton) Robert Reich is doing a great job so far. To help introduce you to this amazing man, let me present you with this clip first: Then watch this clear, short, to the point video produced by MoveOn.org: There are a plethora of other Reich related videos all over Youtube.  I especially found the footage of OWS teach-ins to be especially helpful. Watch these videos with friends and families. Talk about OWS.
0%